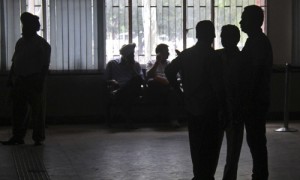 People stand inside the driving registration and license authority office during a power-cut in the northern Indian city of Chandigarh July 31, 2012. Grid failure hit India for a second day on Tuesday, cutting power to hundreds of millions of people in the populous northern and eastern states including the capital Delhi and major cities such as Kolkata. REUTERS/Ajay Verma (INDIA – Tags: ENERGY SOCIETY TRANSPORT)